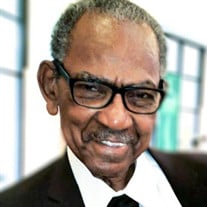 "When that work is all completed, He will gently call you Home; All the pain and grief is over, Every restless tossing passed; I am now at peace forever, for now I'm safely Home." Mr. Willard John Vital entered into Eternal rest on March 24, 2021. An evening visitation (open-casket wake service) will be held Friday, April 9, 2021 from 6:00 p.m. until 8:00 p.m. in the Rose Chapel of Mabrie Memorial Mortuary. Expressions will be allowed during this time. The service and livestream access will begin at 6:30 p.m.: https://www.mabriemortuary.com/WillardVital His Mass of Christian of Burial (closed-casket funeral service) will be held on Saturday, April 10, 2021, 11:00 a.m. at St. Mary of the Purification Catholic Church, 3006 Rosedale Street, 77004. Recital of the Rosary will be prior to service at 10:20 a.m. The Mass will be livestreamed: https://youtu.be/iq8tYK3yLw8 Preferred attire: Midnight blue, silver and black Final Processional and Committal Cemetery Details: Second Line Final Processional on Monday, April 12, 2021, beginning at 11:30 a.m. at St. Joseph's Catholic Church and processing to Porta Coeli Garden Mausoleum of Our Lady of Seven Dolors Cemetery, 209 North Adams Street, Welsh, Louisiana 70591. Viewing will be available through Facebook: https://m.facebook.com/MabrieMortuary --- Born to educate. Born to serve. Born to mentor. The African Diaspora smiled when Dorsey and Eva Bertrand Vital became the proud parents of Willard John Vital on July 23, 1938 in Welsh, LA. He was baptized in Our Lady of Seven Dolors Catholic Church within a week of his birth. Willard was blessed to be raised in a large loving family consisting of four sisters: Lenora Prudhomme, Daisy Harmon, Bertha Mae Kaough and Lena Mae Lemelle, and four brothers: Adam L., Edmond, Wilmon and Nolan Vital. Willard’s career aspirations of studying to become a social worker became a reality when he was recruited to attend a Historically Black College & University, Jarvis Christian College, under the “Fundamental Education” program. He was the first in his family to attend college and always remembers the first “family day” when his parents and some of his siblings visited him at Jarvis, and then returned when he graduated in 1961 with a Bachelors Degree in Integrated Social Sciences. He considered his time at Jarvis to be “some of the happiest days in his life.” Post College, Willard taught school in Welsh before attending training in New Mexico for a planned stint in Brazil with the Peace Corp. Although he did not serve in Brazil, he started learning Portuguese in preparation for the trip. Willard furthered his education in his field and successfully obtained the Master in Social Work from the University of Houston in 1976 and became a licensed Social Worker after receiving his Certification in Social Work. His political aspirations motivated him to run for Texas State Representative in the early 80s. Highlights from his Houston career include: • Social Worker, Depelchin Faith Homes Children’s Center (1966) • Social Worker, Harris County Department of Education; organized school districts through a program called the “Neighborhood Youth Core” • Executive Director, Acorn Community Center, managed a staff in assisting the people of the West End black community • Social Worker, Harris County Department of Health, established portable clinics for the county • Social Worker, City of Houston Human Relations Department, Mayor’s Office (1973-1975) • Social Worker, Martin Luther King Community Center, responsible for the “National Program for Runaway Youth” • Founding President of the Black Heritage Society (1978-2021) – worked in this capacity as President of the Board to honor the legacy of Dr. Martin Luther King, Jr. with a commemorative annual MLK Parade, along with a statue in MacGregor park • Program Director, Hester House Community Center (1978-1980) • Entrepreneur and Owner, Vital’s Construction Company (1981-1990) • Social Worker, City of Houston Health Department, Lyons Health Clinic, worked with the “PIES Program,” took Spanish classes to reach the Hispanic population and ultimately retired from the City (1990-2003) Willard stayed active in a number of community service organizations such as the National Black Social Workers Association, The Black Heritage Society, The Knights of Peter Claver and volunteered his time to feed the homeless and help others for over 5 decades. Accordingly, he was presented with the Good Samaritan Award in September 2007 by the St. Vincent De Paul Society for giving of his time, talent and treasures to console and care for the sick, poor and abandoned in the Houston community. In addition, he volunteered as a crisis prevention counselor with the Houston Police Department and has accompanied policemen to help in crisis situations. He was a proud member of St. Mary’s Catholic Church and was very active with the church’s food pantry outreach efforts. Willard was an active participant in the Houston political scene for over 50 years and continued to mentor and bless others with his caring spirit. He leaves to cherish his memory and legacy: his son, Major Keith Vital, USMCR (ret) and (current) Transportation Operations Manager, (Dr. Angela Branch Vital) of Houston, TX, his 3 daughters: Gabriella Vital Daniels, Pharmacy Technician, Certified Nursing & Medication Assistant, (David Daniels), Tanika Vital-Pringle, Global MBA, CEO + Chief Brand Strategist, (Glenn O. Pringle) and Gabrielle Bernard, M.D., M.B.A of Pacific NW. He also leaves his two grandsons: Aaron Keith Vital, Bar Mordechai William Bernard Wachman and one granddaughter: Amarah Marbella Pringle Vital. He spent the last decade of his life enjoying his grandchildren and circle of love immensely. Rest in peace and power and the soon return of our Lord and Savior Jesus Christ.

"When that work is all completed, He will gently call you Home; All the pain and grief is over, Every restless tossing passed; I am now at peace forever, for now I'm safely Home." Mr. Willard John Vital entered into Eternal rest on March 24,... View Obituary & Service Information

The family of Mr. Willard John Vital created this Life Tributes page to make it easy to share your memories.

&quot;When that work is all completed, He will gently call you Home;...

Send flowers to the Vital family.