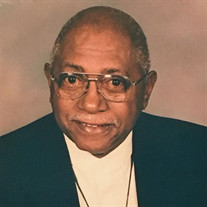 In Faith, In Service, & In Love, so shall I live and die Wallace Joseph Granger was born in Rayne, Louisiana to the late Arthur Granger Sr. and Florence Sonnier April 15, 1936 to which he was the oldest of six children. A few days later, he was baptized at the Shrine of Our Mother of Mercy Catholic Church. In 1944, the family moved to Port Arthur, Texas. Wallace attended Sacred Heart Catholic School. In his freshman year of high school, he moved to Bay St. Louis, Mississippi to study at St. Augustine Seminary. Following high school, he joined the United States Air Force and attended St. Phillip College in San Antonio, Texas, where he achieved his certification as an electrician. Shortly thereafter, he was transferred to Thule, Greenland. One year later, he was honorably discharged from the U. S. Air Force. Upon returning to Port Arthur, Texas, he worked as an electrician and attended Lamar University in Beaumont, Texas for continuing education. Five years later, Wallace married Shirley Lenora Hicks from Hungerford, Texas, a union to which one child was born. Wallace was always charismatic and cheerfully greeting those with whom he came in contact. His legacy in life was serving and praying for the less fortunate. He utilized his time, talent, and treasure in service through St. Vincent de Paul in his parish prior to working as a Merchant Seaman. As a seaman, he was blessed to see and experience the wonders of God’s creation by traveling all over the world. He ceased every opportunity to pray and extend a helping hand to those suffering in impoverished communities. In 1991, he retired from Sabine Towing and began volunteering in the state and federal prison systems in 1993. He often stated that he was “thankful to be doing God’s work in the prison system.” As a prison Chaplain and Lay Carmelite of 20 years, he walked with many inmates in their conversion. “There are inmates who are crying for spiritual help. It is sad when some people reject them because of their crimes, social status, race or religion. I was taught by the Irish priest and nuns to help others whether they asked for help or not.” His service also included providing communion to the sick at St. Mary’s Hospital in Port Arthur, Texas as a Eucharist Minister and serving faithfully as an Usher at Sacred Heart Catholic Church. He was a devoted member of the Legion of Mary, Knights of St. Peter Claver No. 18 - 3rd & 4th Degree, and the Kingsman Social Club. Due to declining health, Wallace moved to Houston, Texas January 1, 2008, where he was in the loving and dutiful care of his daughter. A few years later when his health improved, he resumed his spiritual outreach leading prayer groups at his residence and brief stays at various care facilities until he was called to eternal rest on Friday, April 12th. His surviving family includes his ex-wife, whom he often referred to as his best friend, Shirley Hicks Granger, of Houston, TX; a devoted daughter, Crystal Yvette Granger of Houston, TX; a devoted grandchild, Chimere Sonnier Davis (Tyrone) of Houston, TX; a loving sister, Thelma L. Granger of Port Arthur, TX; a loving brother, Arthur Granger Jr. (Sylvia) of Ft. Washington, MD; a loving brother-in-law, Felton Harris Jr. of Houston, TX; a loving uncle, Edward Sonnier of Crowley, LA; Nieces: Felicia Hulin (Michael) of Chula Vista, CA, Trinita Granger and Ariana Lyn Harris of Houston, TX; Nephews:, Eric Granger and Darrell Granger (Yolanda Michelle) of Port Arthur, TX, Wenzel Sonnier Granger of Ft. Washington, MD; Godchildren: Reginald Gerard Sonnier of Dallas, TX and Dora Brown of Port Arthur, TX; childhood and devoted friends, Herman Dugay of Port Arthur, TX and Rev. Richard York of Houston, TX; and a host of friends and family that completed his village of love. Final Arrangements Entrusted To: Gabriel Funeral Home 2500 Proctor St Port Arthur, TX 77640 (409) 983-6661 (409) 983-6662

In Faith, In Service, & In Love, so shall I live and die Wallace Joseph Granger was born in Rayne, Louisiana to the late Arthur Granger Sr. and Florence Sonnier April 15, 1936 to which he was the oldest of six children. A few days later, he... View Obituary & Service Information

The family of Mr. Wallace Joseph Granger created this Life Tributes page to make it easy to share your memories.

In Faith, In Service, &amp; In Love, so shall I live and die

Send flowers to the Granger family.