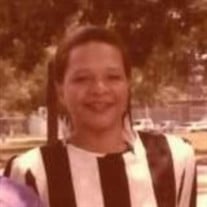 “The beauty of a loved one is in the memories they have shared with us.” Mrs. Theresa A. LaCour entered into Eternal Rest on May 19, 2021. Her life will be celebrated on Tuesday, May 25, 2021, at 10:00 A.M. in the Rose Chapel of Mabrie Memorial Mortuary. Livestream access: https://www.mabriemortuary.com/TheresaLaCour ... Celebrating a Life Dedicated to Service Theresa Ann LaCour was born December 26, 1945, to Arthur and Dora Lee (Asberry) Jackson in Detroit, MI. She was baptized in the Roman Catholic faith and attended Catholic school at Sacred Heart and Annunciation High School, graduating in 1964. Growing up in Motown, Theresa enjoyed music, activities with friends, and family gatherings. She earned a Bachelor of Science degree in Criminal Justice from Wayne State University (Detroit, MI) in 1979, a Texas State Parole Officer Certification from Sam Houston University (Houston, Texas) in 1982, and a Master of Education degree in Guidance and Counseling from Texas Southern University (Houston, Texas) in 1998. Theresa decided to move to Houston, Texas, in 1981, where she immediately found employment with a real estate agency. After completing her certification to become a parole officer, she soon found herself working at the State Board of Pardons and Paroles (1982-1984) in Harris County for the penal system as a parole officer. From 1985-1994, she held various positions in the Department of Corrections. After working for the correctional system, later on, she switched careers. Theresa's commitment to education and helping her community led to her ultimate career path as an educator. She worked for the Archdiocese of Houston for several years, and she also taught at Texas Southern University and the University of Houston. In 2016 Theresa retired from the Archdiocese; however, the love for teaching led her to come out of retirement. Much to her beloved students' surprise, she continued to teach on an extended contract until 2018. Up until her untimely departure, many of her students remained in close contact with her. The students often showered her with many cards, gift cards, lunches, dinners, and appreciation gifts. The apple of Theresa's eyes were her children Natalie and Phillip. She was a proud, doting mother, selecting the right schools, attending their programs, enrolling them in music, dance, and other aspects of their interests. On Wednesday, May 19, 2021, Theresa earned her wings and joined her parents in heaven. She leaves to the earthly sphere one daughter, Natalie, one son Phillip, two godchildren, Tewahado and Solomon; seven grandchildren; Morgan, Lovey, Serenity, Asia, Makya, Mackenzie, and Phillip Woodworth Jr.; siblings, Jean, Arthur Jr. (deceased), Rose (deceased), Corrine (deceased), Martin (Karen-deceased), and Mary; and a host of nieces; Tina, Chaira, Michelle, Karrina; nephews; Vincent (deceased), Martin Jackson Jr., Martez Conner, Jackson Riley, and Johnathan Riley; family, and friends. She also had one special friend Roderick Woodworth. OUR TRIBUTE TO MOTHER Mom, the time you invested in us will not be in vain. Physically, you are no longer with us, but you will forever remain in our hearts. Always emphasizing education, the morals and values you instilled in us will remain steadfast forever. We could not have had a better Mother. – Natalie and Phillip ACKNOWLEDGMENT OF APPRECIATION The family of Theresa A. LaCour wishes to acknowledge with deep appreciation the many comforting messages, cards, floral tributes, prayers, and many other expressions of kindness and concern evidenced at this time in thought and deed. A more personal acknowledgment will be made at a later date.

The family of Ms. Theresa A. LaCour created this Life Tributes page to make it easy to share your memories.

“The beauty of a loved one is in the memories they have shared...

Send flowers to the LaCour family.