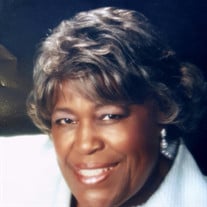 Theresa Beatrice Mitchell Eglin was born in Mart, Texas on October 19, 1933 to Caleb and Mable Mitchell. She was the youngest of two daughters. Her parents preceded her in death. She attended public school in the Mart Public School System. After graduating High School she moved to Houston to be with her sister and continued her education at Texas Southern University. While living in Houston, Theresa met and married Chester Eglin, Jr. To this union was born three children, Chester (Chuck), Rosalind, Ronald and one step daughter Connie. They remained married for 43 years until his death in 2002. She accepted Christ at an early age and was baptized at Rocky Creek Baptist Church in Mart, Texas. After relocating to Houston she united with South Union Missionary Baptist Church and later became a faithful member of Jordan Grove Missionary Baptist Church until her death. Theresa was employed by IBM for a short period of time; and later went to work at Entex Gas Company for 15 years. Not ready to stop working she began to work for Communities In Schools of Houston until she retired. Theresa transitioned from time into eternity on April 28, 2017. She was preceded in death by her parents Mable & Caleb, a stepmother Gatsy Mitchell, and her husband Chester Eglin, Jr. She leaves to cherish her memories her children; Chester “Chuck” Eglin of Houston, TX, her daughter Rosalind Augustine (Darrell) of Missouri City, TX, and Ronald Eglin (Peaches) of Houston, TX, a stepdaughter Connie Lewis (John) of Port Arthur, TX. She was the legal guardian of Ilene Hicks (Joseph) of Fairburn, GA, her only sister Velma Lightfoot of Houston, TX, one god daughter, three sister in laws, two brother in laws, thirteen grandchildren, eleven great grandchildren and a host of nieces and nephews.

Theresa Beatrice Mitchell Eglin was born in Mart, Texas on October 19, 1933 to Caleb and Mable Mitchell. She was the youngest of two daughters. Her parents preceded her in death. She attended public school in the Mart Public School System.... View Obituary & Service Information

The family of Mrs. Theresa Beatrice Eglin created this Life Tributes page to make it easy to share your memories.

Send flowers to the Eglin family.