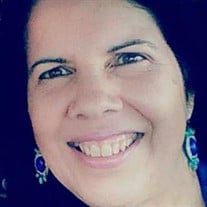 For livestream access to memorial service, please use the following link: https://m.youtube.com/watch?v=HOB8umeGm20&feature=youtu.be - - - Minister Sherry Marie Pritchard, a loving mother, daughter, sister, aunt, and friend, went home to be with the Lord on April 21, 2022 at age 61 after a courageous battle with cancer. Sherry was born in Lorain, Ohio on November 26, 1960 to Sophia Marie and Gerald W. Pritchard. A graduate of Farmington High School, Sherry continued her schooling at Michigan State University, receiving a Bachelors of Science in Dietetics in 1983, and gained her Registered Dietician (R.D.) credentials through a post-graduate program at Wayne State University. On April 18, 1987 she welcomed her beloved daughter, Erica Marie Sun, into the world. Sherry was passionate about her profession as a clinical dietician and diabetes educator. After serving for many years in the Detroit Metro area, Sherry relocated to Houston, Texas in 2011. She was a proud employee of Houston Methodist Hospital and was humbled to receive the “Sacred Works” Award for her excellence in patient care in 2013 at the San Jacinto campus. “Sacred Works” is laying a foundation of love, grace and charity; it is having a servant’s heart, unconditional love and compassion for patients and each other. Beyond her clinical role, Sherry served as a Board Member of the Baytown Chapter of the American Diabetes Association, coordinating education events and fundraising opportunities for those at-risk for and living with diabetes in the community. Sherry was devoted to her vocation and to her patients, as was demonstrated by her choice to continue to work full-time despite her diagnosis, and she considered her colleagues part of her family. Outside of work, Sherry dedicated a significant portion of her time and talents to her church home, Houston Deliverance Center, where she diligently served in multiple capacities. Sherry’s commitment to God and the ministry was perpetually demonstrated through her faithfulness as a minister, children’s church instructor, and member of the hospitality and evangelism teams. By virtue of her involvement on the Board of Directors for Houston Deliverance Center and When In Need, Inc., Sherry not only made a substantial impact on the church but the surrounding community at large. The When In Need non-profit organization promotes the development and enhancement of underserved children and families both locally and abroad. Sherry greatly contributed to the success of the organization in fulfilling its purpose through the rendering of clothing, food, housing, and utility assistance, and she was pivotal in piloting fundraising opportunities, such as the annual Walk-A-Thon, for educational enrichment events and scholarships. Sherry always displayed a pleasant smile, disposition, and willingness to serve in God’s house. Her level of service was so impactful that Houston Deliverance Center honored her with an award for her hard work and dedication. Sherry personified what it means to be a believer and a true woman of God. She exuded the love, meekness, and kindness of Christ to all whom she encountered, and her presence will be greatly missed, as she was an intricate and valued part of the ministry. Time with family was most treasured by Sherry, and she made every effort to spend quality time with loved ones even amidst the distance that separated them. A member of the Oneida Nation of the Thames, Sherry had a special talent for storytelling. She loved to talk, tell stories, and reminisce; she could recall random facts, memories, and recite things that would send you reeling. She loved to watch classic movies and never got bored with the reruns. Sherry also cherished time with her grand-pup, Owen. When she was surrounded by her family engaged in her favorite activities, her countenance was that of a delighted child. Sherry will be remembered as having a heart of gold. Her generosity was never ending, and even when times were tough, she still gave what she could to those in need. Sherry is survived by her mother, Sophia Marie Jacobs; her daughter, Erica Marie Sun; her sisters, Jane E. (Michael Sr.) Crawford, Jennifer L. (Christopher) Crawford, and Allison Pritchard; her brothers, Benjamin, Matthew, and Aaron Pritchard; her nieces, Karley (Adam Sr.) Weiler and Mia Crawford; her nephews, Michael Jr., Mitchell (Ashley), and Drew Crawford; and her great nieces and nephews, Adam Jr. Weiler, Harvey Crawford, Mackenzie Crawford, and Peyton Weiler. She is preceded in death by her father, Gerald W. Pritchard, and her step-father, Harvey H. Jacobs. A Memorial Service will be held in her honor at 1 pm on Saturday, May 21 at Mabrie Memorial Mortuary 5000 Almeda Road in Houston, TX. Those unable to attend the service in-person are invited to attend virtually via the provided link. A Celebration of Sherry’s Life will be held at a later date in Michigan. To honor Sherry’s life, the family suggests planting a tree in her memory with the Arbor Day Foundation, giving blood to a local hospital or blood bank, or volunteering at the Houston Food Bank. Condolences may also be sent via donations to the Shriners Children’s Hospital in Sherry’s name.

The family of Minister Sherry Marie Pritchard created this Life Tributes page to make it easy to share your memories.

For livestream access to memorial service, please use the following...

Send flowers to the Pritchard family.