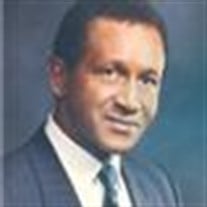 1935-2015 June 1, 1935 – July 15, 2015 Ronald Anthony Haley was born in Baltimore, Maryland to Elizabeth Weems Haley and Emmett George Haley. Ronald spent his early childhood in lovely Lusby, Maryland, where the Patuxent River meets the Chesapeake Bay. Ron’s roots were formed in this small Calvert County community. He developed a lifelong love for horses, fishing, and hunting. Ron’s beloved Great Aunt Mary O’Deal and Uncle Amos Johnson loved him as a son and taught him industriousness, humility, and patriotism. At age 9 Ron moved to New York City. In East Elmhurst, Queens, the family led a typical American life. He enjoyed adventures like train rides to Ebbets Field to see Brooklyn Dodger Jackie Robinson, with or without parental permission! While at Flushing High School, Ron studied hard and played basketball. He befriended players on a neighboring high school team, who were cousins of “Deb” Penn, Ron’s bride-to-be. He attended Lincoln University in Pennsylvania, studied, and pledged Omega Psi Phi Fraternity, Inc. After graduation, Ron completed Officer Training School for the Marine Corps and was stationed in Japan and the Philippines. With an honorable discharge, he entered Meharry Medical College. Four years later Ron, Debbie, and their first 2 children graduated. After a residency at Downstate Medical Center in Brooklyn, the family moved to Houston. Ron was committed to community medicine. His practice locations over the decades say it all: Scott St, Sunnyside, Acres Home, Griggs Rd, Almeda Rd, Caroline St, South Loop, Lyons Ave, and St. Elizabeth’s and Riverside General Hospitals. He was the Harris County Jail Medical Director. He was a Longhorn, who earned a Masters in Public Health from UT Health Science Center-Houston. Ron served as adjunct faculty and on the admissions committee at the Medical School. As an officer in the Houston Medical Forum, he worked with colleagues to diversify the profession. Ron and Debbie enjoyed National Medical Association annual meetings, where they reunited with generational friends from the African American medical diaspora. His actions spoke louder than his words. Ron was charitable to many, some directly, others by supporting Debbie’s extensive volunteerism. Together they chaired a UNCF Gala. Upon arriving in Houston, they joined St. James’ Episcopal Church, where he served on the Vestry and in the Brotherhood of St. Andrew, creating enduring relationships for the entire family. Ron was an excellent father, forthright, steady, guiding, undergirding everything his children did. He shared his love for jazz and the arts with family and friends. A favorite exhortation was, “Education is liberation.” Ronald Anthony Haley was the son of Elizabeth Weems Haley and Emmett George Haley, and the husband of Leona Deborah Haley, who preceded him in death. He is survived by his four children: Anthony and wife My-Cherie, Sean and wife Christine, Kyle, and Rhonda and husband Efrem Sewell. He was preceded in death by his daughter, Alyssa. He is survived by grandchildren: Elijah and Evan Sharpe; Joshua, Channing, and Colson Sewell; and, Nina, Ava, McIntosh, and Jasmine Haley. His passing is mourned by his brother Vernon and wife Joyce Payne, and Aunts Ella Mae Gross and Ruth Reynolds. He was preceded in death by Uncle Cephas Gantt, Aunt Gladys Thompson, and Great Aunt Mary O’Deal and husband Uncle Amos Johnson. He will live on in the memories of cousins: Larry and his wife Gloria Gross, Leon, William and wife Gail Reynolds, Doris, Patricia, Maurice, Samuel, Douglas, Deborah, George, Curtis, Joseph, Carol, Joyce, and many other family members and friends

The family of Ronald Anthony Haley MD, MPH "One Cool Cat" created this Life Tributes page to make it easy to share your memories.

Send flowers to the MD, MPH "One Cool Cat" family.