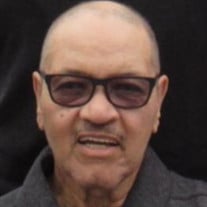 Mr. Robert Parker entered into Eternal Rest on April 30, 2020. The Celebration of Life service will be Saturday, May 9, 2020 in the Rose Chapel of Mabrie Memorial Mortuary. His service will be attended privately and may be viewed through live stream starting at 10:00 A.M.: https://www.mabriemortuary.com/RobertParker ---- Robert Louis Parker was born May 17, 1933 in Hamtramck, Michigan to Glen and Flossie Parker (maiden name, Flossie Puryear). He was the second oldest of their four children. Robert, affectionately known as “Bobby”, had a tremendous affection and talent for music at an early age. He began playing the saxophone in elementary school as a part of the Cleveland Elementary School band. Eventually, his parents arranged for him to take music lessons and by the time he was in twelfth grade, they brought him his own saxophone. Robert embraced his love for music. Following High School, he applied and was accepted to Wayne State University in Detroit, Michigan where he qualified for the Wayne State University band. It was during this season he also began working part-time at the United States Tank Automotive Command (USTACOM). Many of his friends were in the US Army, so he decided to volunteer for the Korean conflict of 1952. After basic training, Robert was ordered to the 49th Infantry Army Band at Ft. Stewart, Georgia until his Honorable Discharge in 1954. Thereafter, he returned to Detroit and ventured back into the music business. He formed a jazz band that played at Little Sam’s from 1955 to 1960. In addition, Robert was also privileged to sit in with the James Tatum Jazz Ensemble. Later, Robert met a young man at USTACOM named “Big Mayhawk” who became a best friend for life. They formed and promoted a concert at the historic Masonic Temple in Detroit, Michigan. This concert did not turn out as he intended yet served as a personal milestone within the tapestry of his music industry vision – a memory he never forgot. Robert played saxophone for different bands and had a long history of playing at various jazz lounges throughout the Detroit area to supplement his income with his passion for jazz. He was introduced to Berry Gordy of Motown Records and thought he was on the road to Hitsville USA. Unfortunately this dream was filled with broken promises, but that never killed his passion for playing. He also developed another meaningful relationship while and USTACOM. He eventually crossed paths with a smart, sophisticated, talented and gorgeous young lady by the name of Winifred Ann Killian. They dated for two years and united in marriage on September 11th, 1966. From this union, they started their family and had two children, Tracey Darice Parker and Darryl Robert Parker. They shared 50 years of a blessed and sacred marriage prior to Winifred transitioning. Robert was a true provider and protector of his home. He was a family man and was proud of his role as husband and father – he took neither role lightly and committed his life to each responsibility with whole-hearted love and tenacity. While in Detroit, Robert joined Tabernacle Missionary Baptist Church with his wife Winnie and there he continued his relationship with Jesus Christ and his fellowship with other members of the congregation. In 2017, Robert and Winifred joined their two children in Houston, Texas where he eventually joined Wheeler Avenue Baptist church under the Rev. Dr. Marcus D. Cosby. Robert had a passion for all Detroit sports teams (even the Lions), barbequing during family and friend backyard socials, baseball, bowling, golfing, and gathering with his best friends, David, Jimmy, and Al Bell – together they had combustible laughter that filled any room and brought joy to those around them. On April 30, 2020, Robert transitioned to be with the Lord. Proceeding him in death was his father (Glen Parker), his mother (Flossie Parker), and his wife (Winifred A. Parker). Robert leaves to celebrate his memory, his daughter (Tracey Parker), his son (Darryl Parker), his daughter-in-law (Trela Parker), four grandchildren (Tahlia Parker, Dawson Parker, Daxton Parker, and Devin Daniels), and three siblings (Audrey Parker, Gerald Parker, and Glen “Larry” Parker). He also leaves to celebrate his life several loving nieces, nephews, cousins, and a host of other extended family and friends.

Mr. Robert Parker entered into Eternal Rest on April 30, 2020. The Celebration of Life service will be Saturday, May 9, 2020 in the Rose Chapel of Mabrie Memorial Mortuary. His service will be attended privately and may be viewed through live... View Obituary & Service Information

The family of Mr. Robert Parker created this Life Tributes page to make it easy to share your memories.