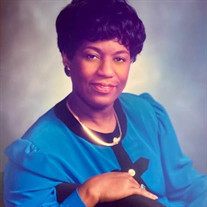 "A light from our household has dimmed. A voice we loved has been stilled. A place is vacant in our hearts that can never filled." Mrs. Patricia Ann Ganaway Williams entered into eternal rest on September 30, 2021. Her life will be celebrated on Saturday, October 16, 2021, at 10:00 a.m. in the Rose Chapel of Mabrie Memorial Mortuary. Visitation will be prior to service, starting at 9:00 a.m. For livestream access to her service, please visit: www.mabriemortuary.com/PatriciaWilliams --- Patricia Ann Ganaway Williams was born to Irene and Cleophus Carl Ganaway on November 19, 1940 in Houston, Texas. Reared in Clinton Park, she attended Clinton Park Elementary School, as well as Booker T. Washington High School where she graduated Valedictorian and earned the Houston ISD’s Evan E. Worthing full scholarship to Tennessee State University. She earned her Bachelor of Science degree in Biology and Medical Technology. While at TSU, she was initiated into the Alpha Psi Chapter of Alpha Kappa Alpha Sorority Inc. After graduation, she became the clinical director of the medical technology program and chemistry lab at Meharry Medical College. While at Meharry, she met and later wed Arthur L. Williams in 1965. A year later, they were greeted by their first-born daughter, Terri Williams, followed by Toni Keaton in 1967, and Tara Roy in 1975. Mrs. Williams moved to Houston with her family in the early 1970s. In 1974, she formed the LA Pat Inc. and worked alongside her husband’s medical practice with the late Harold Mullins and Toni Keaton as consultants until medical retirement in 2013. She was active in community organizations, such as the Links Inc., as well as Jack and Jill of America and the League of Women Voters. She was also a member of the Auxiliary of St. Joseph’s Hospital in Houston. Mrs. Williams was also a charter member of the Omicron Tau Omega Chapter of Alpha Kappa Alpha Sorority in Spring, Texas. A devout Christian, she was a member of First United Methodist Church in downtown Houston for over 40 years. Mrs. Williams passed away on September 30 after a brief illness, at home with her family at her bedside. She is survived by her husband Arthur, daughters Terri, Toni and Tara, sons-in-law Alphonso Keaton and Demetrius Roy, two grandchildren Kaelynn and Khari Keaton, her sister Connie Wesley, nephew Gregory Eugene Ganaway and wife Terri Ann and a host of nieces, nephews and cousins.

"A light from our household has dimmed. A voice we loved has been stilled. A place is vacant in our hearts that can never filled." Mrs. Patricia Ann Ganaway Williams entered into eternal rest on September 30, 2021. Her life will be celebrated... View Obituary & Service Information

The family of Mrs. Patricia Ann Ganaway Williams created this Life Tributes page to make it easy to share your memories.

&quot;A light from our household has dimmed. A voice we loved has...

Send flowers to the Williams family.