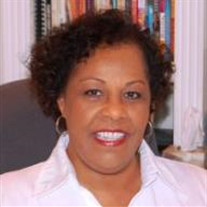 Dear Family and Friends: We are deeply saddened to announce the passing of our beloved Nancy Trusclair Whitaker at age 72 after a very courageous six-year battle with cancer. She transitioned peacefully on July 5, 2016 in Houston with family at her side. She leaves behind her husband, Thomas James Whitaker, Sr. (“James”); sons, Thomas Jr. (Kim) and Jeff Whitaker; and grandsons, Collin and Clark Whitaker. Nancy was born August 24, in New Orleans, LA to Edward Trusclair, who preceded her in death and Beatrice Trusclair. She was the first-born child and grew up in a large and loving extended family. Nancy was baptized at Saint Paul Catholic Church in Bayou Goula, LA. In addition to her husband and sons, Nancy is survived by her sisters, Bette Gaines and Joyce Trusclair; her brothers, Edward, Elton and Craig Trusclair (Rose) and numerous nieces, nephews and cousins. Nancy married James on March 20, 1964 at Saint Paul Catholic Church. Shortly after, they relocated to Alexandria, LA then Madrid, Spain and lived in many locations across the U.S., and the world while James served in the U.S. Air Force. The couple settled in Houston, TX in 1981, where they raised their two sons. Nancy attended Southern University, graduated from the University of West Florida with a degree in social work in 1981, and the University of Houston with a master’s degree in clinical social work in 1985. Nancy went into private practice in 1985 and retired in 2014. She was an accomplished relationship expert, author and psychotherapist sharing wise and sensible advice with her clients and Houston audiences through numerous appearances on television and radio shows. She touched thousands of lives. Thanks so much for your support and prayers as we grieve the loss of our wife, mother, grandmother, sister, cousin and friend. The family would especially like to thank cousins Irma Anderson and Gertrude Knight, her sister Joyce and friend Flora Tisdale for their loving care and the staff of Houston Hospice for their constant, attentive treatment. Nancy was a person of strong faith. Take comfort in knowing her spirit is at peace. At her request, the family will celebrate her life with a private ceremony. In lieu of flowers, Nancy asked that donations be made to Houston Hospice, http://www.houstonhospice.org/donate.aspx#noredirect. Condolences can be sent to 12307 Pine Brook Dr., Stafford, TX 77477. In His Name, The Whitaker Family

Dear Family and Friends: We are deeply saddened to announce the passing of our beloved Nancy Trusclair Whitaker at age 72 after a very courageous six-year battle with cancer. She transitioned peacefully on July 5, 2016 in Houston with family... View Obituary & Service Information

The family of Nancy Trusclair Whitaker created this Life Tributes page to make it easy to share your memories.

We are deeply saddened to announce...