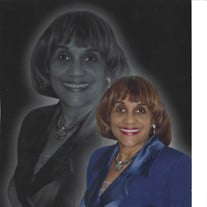 Mildred was born in Houston, Texas March 18, 1935 to William Johnson and Willie Lou (Brown) Johnson.  She grew up in the 3rd Ward area and attended Jack Yates High School where she was a high-stepping, baton-twirling majorette, and graduated in 1952. She studied business administration at Texas Southern University, and began her long career in medical records administration and information management working for local physicians. She continued her studies at Long Island University, and received her B.S. degree at Lutheran Medical Center, School for Medical Records Administrators in Brooklyn, New York.  She subsequently moved to Washington, D.C. where she worked at Howard University Freedmen’s Hospital.   Mildred returned to Houston in 1964, and worked in medical records at various hospitals, and ultimately as Chief of Medical Information for 20 years at the V.A. Medical Center, where she mentored and trained many medical records professionals. Upon retiring from the V.A., she became a motel and restaurant owner/manager. In addition, she also operated a girls’ residential treatment facility, Young Women of Character, Towards the end or her career she worked at Ben Taub Hospital, and as a consultant for several home health nursing agencies before retiring permanently.   Mildred always had a keen sense of style and passion for clothing and accessories, modeling, interior decorating and shopping for home décor and antique furniture. She loved cooking (best potato salad, bar none!), and having a good time laughing, dancing and hosting parties for family and many friends. She especially enjoyed attending social events, and was an active member of Top Ladies of Distinction, National Association for Female Executives, and the National Women of Achievement. Mildred was dearly loved by those who knew her for her infectious laughter, sense of humor, generosity, and always trying to help others. However, if you ever borrowed one of her outfits, she would make sure you didn’t forget to return them.   Mildred was a member of Mt. Hebron Missionary Baptist Church for over 35 years, where she served on the deaconess board, and frequently modeled her personal attire for various church fundraisers alongside her husband, William Barefield, Sr., until her health began to decline. She courageously battled against Alzheimer’s dementia for many years, still laughing and dancing and always pleased to have visitors until the end of her journey. On October 29, 2016, she passed away peacefully with a smile on her face at home with her devoted daughter Judy and granddaughter "Micki" at her side.   Mildred was preceded in death by her parents, son William “Butch” Johnson Davis, her beloved siblings, brothers Booker T. Armstrong and Rudolph Johnson, and sister Betty Lou (Armstrong) Marshall, step-son William Barefield, Jr., son-in-law Kenchion Jones, and step-daughter Deborah Barefield.   Mildred is survived by her husband William Barefield, Sr., daughter Judith (Campbell) Washington, sons Wayne Campbell and William “Billy” Tucker, III, sister Beverly Oliver, step-daughters Renee Jones, Dianne Bennett (Morris), Melba Montgomery, Fran Patterson (Henry), grandchildren Micki, Wayne, Veleaka, Felicia, step-grandchildren Jacquelin, Donté, Renard, Neiman, Chelsea, William “Trip” Barefield, III, Dawn, Barbara and Lauren, sister-in-law, Jimmie Armstrong, the Armstrong, Marshall-Scott and Wilson-Oliver families as well as a host of great-grandchildren, nieces, nephews and extended family and friends.   Donations may be made to the Alzheimer's Association in Mrs.  Barefield's name. http://alz.org Alzheimer's Disease and Dementia | Alzheimer's Association alz.org Alzheimer's Association national site – information on Alzheimer’s disease and dementia symptoms, diagnosis, stages, treatment, care and support resources.

Mildred was born in Houston, Texas March 18, 1935 to William Johnson and Willie Lou (Brown) Johnson.  She grew up in the 3rd Ward area and attended Jack Yates High School where she was a high-stepping, baton-twirling majorette, and graduated... View Obituary & Service Information

The family of Mrs. Mildred Joyce Barefield created this Life Tributes page to make it easy to share your memories.