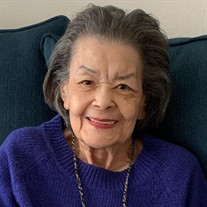 Julia Cathrin Morris Banfield, beloved by all who knew her, passed away peacefully in Houston, Texas on January 29, 2022. She was born on March 26, 1932 in Dover, Delaware and was the daughter of Anna Laura Morris and the granddaughter of Carlos and Elizabeth Morris. She attended Dover High School and was accepted to Delaware State College in Dover. Julia later graduated from Howard University School of Nursing in Washington, DC, with a Bachelor of Science degree in Nursing. While working as a registered nurse at Freedmen's Hospital, she met the love of her life, Edison Hamilton Banfield, a young medical student at Howard University Medical School. Julia and Edison were married on February 26, 1954. Shortly thereafter they moved to Brooklyn, New York for her husband to complete a general surgery internship at Kings County Hospital, where their first child Ava was born. While living in Brooklyn, Julia worked as a neonatal nurse at Brooklyn Jewish Hospital. Julia and Edison later moved back to Washington, DC where they welcomed more children, Yvonne Marie and Stephen Michael. In 1959, Edison was lured to Houston by his brother Dr. Michael Banfield and Edison Jr. was born in Houston in 1960. Julia and Edison lived in a beautiful neighborhood in Third Ward and enjoyed a socially active life over many years with good friends and neighbors. They joined a local bowling league and Julia was active in the Houston Medical Forum Auxiliary. She and Ed enjoyed vacations to Acapulco and Mexico City, and trips to mainland China and Hong Kong. Julia and Edison were married 61 years until Edison's death in 2015. Julia was dearly loved by her family and friends, all of whom will miss her very much. Julia is survived by her daughter, Ava Banfield Plummer, and son, Stephen Michael Banfield (Lynora); grandchildren Brian Plummer, Morgan Saliba, Sabrina Holland (Brandon), and Julia Calina (Laurentiu); six great grandchildren; daughter-in-law Patricia Valdez Banfield; and sons-in-law, James Plummer and Philip Lee. She was preceded in death by her husband Edison Hamilton Banfield, M.D.; son Edison Hamilton Banfield, Jr., daughter Yvonne Marie "Bunny" Lee; great grandson Adam Christopher Salinas-Plummer; and brother Joseph B. Morris of Washington, D.C. A Celebration of Life service will be held Thursday, February 17, 2022, at 9:00 am at St. James' Episcopal Church, 3129 Southmore Boulevard, The Reverend Victor J. Thomas, officiating. The interment will follow at 11:00 am at Houston National Cemetery, where Julia will be laid to rest with her husband. Service will be livestreamed at 9 am on the following link https://youtu.be/WhAfssXZ4jM

Julia Cathrin Morris Banfield, beloved by all who knew her, passed away peacefully in Houston, Texas on January 29, 2022. She was born on March 26, 1932 in Dover, Delaware and was the daughter of Anna Laura Morris and the granddaughter of Carlos... View Obituary & Service Information

The family of Mrs. Julia Cathrin Banfield created this Life Tributes page to make it easy to share your memories.

Julia Cathrin Morris Banfield, beloved by all who knew her, passed...

Send flowers to the Banfield family.