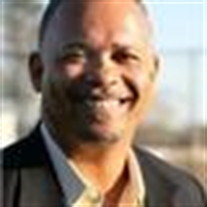 1963-2015 “Death leaves a heartache no one can heal, Love leaves a memory no one can steal.” In Loving Memory Coach John Theodore Cochran Jr. Motivational Speaker, Tennis Coach, Mentor and Friend Alpha - April 24, 1963 Omega - October 5, 2015 Coach Cochran played tennis for Texas Southern University from 1982-86 and earned a bachelor’s degree in psychology with a minor in philosophy. After his graduation, he moved to North Hollywood, Calif. and worked with at-risk youth. In 1998, he returned to Houston and worked for several respected agencies before accepting a position at Independent at Prairie View A&M in 2000 as an academic advisor. In 2004, he joined the Prairie View athletic department as the University College Professional Advisor for Athletics and, in 2008, he accepted the position of Academic Enhancement Coordinator at Prairie View A&M. At the time of his demise he was serving as Academic Advisor at Houston Community College, Houston, Texas. Coach Cochran is survived by his wife of 22 years, Adrienne R. Cochran; their children, Joshua, John and Gabrielle; his sisters, Eva M. Smith (Rory), Lisa A. Porter (Fulton) and Connie L. Cochran; mother-in-law, Lois E. Pettis and father-in-law, Leon Pettis and many other dear relatives and friends. His parents, John Theodore Cochran and Eva Lou Cochran preceded him in death. His life will be celebrated at St. James Episcopal Church, 3129 Southmore, Tuesday, October 13, 2015, 11:00 AM. Visitation will be prior to service beginning at 10:00 AM. Interment will be Houston Memorial Gardens Cemetery, Pearland, Texas

The family of John T. Cochran Jr. created this Life Tributes page to make it easy to share your memories.

Send flowers to the Cochran family.