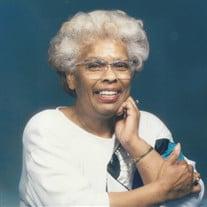 Mrs. Hattie M. Blanton entered into Eternal Rest on May 28, 2020. A walk-by visitation will be held Wednesday, June 10th, 10:00 A.M. until 10:45 A.M. in the Rose Chapel of Mabrie Memorial Mortuary. Her service may be viewed by live stream, June 10th at 11:00 A.M.: www.mabriemortuary.com/HattieBlanton In lieu of flowers, donations may be sent in her honor to Prairie View A&M University, Office of Development, P.O. Box 393, Prairie View, TX, 77446-0393. --- Hattie Mae Blanton was born on August 19, 1927 in Grapeland, Texas. She was the youngest of ten children born to the late Rosie Lee and Herbert Hicks. She passed away peacefully on May 28, 2020. Hattie graduated from Prairie View, A & M University where she met the love of her life, George Blanton. They were married on August 13, 1948. In the mid 1950s Hattie and George moved to Omaha, Nebraska following George’s discharge from the Army and graduation from at the University of Pittsburgh School of Physical Therapy. Together they raised their family and lived in Omaha for over 30 years. Following George’s death, she retired from the VA Hospital in Omaha and moved to Carmichael, CA. She remained there until 2006 when she moved to Altadena, CA to be near family. She was an active member of Zeta Phi Beta Sorority, Inc. and Westminster Presbyterian Church. Hattie was a devoted mother and avid traveler. She was also married to her sports teams for better or worse. She cheered on her Dallas Cowboys, Los Angeles Lakers and L.A. Dodgers from her couch. She was known to be exhilarated when in a Dodger stadium seat eating a “Dodger Dog”. Hattie leaves to cherish her memory two children Deborah (Jonathan) of Altadena, CA, Ronald (Ana Maria) of New Orleans, LA, one step-son Jackie of Houston, Texas, five grandchildren, two great grandchildren and a host of nieces and nephews and friends.

Mrs. Hattie M. Blanton entered into Eternal Rest on May 28, 2020. A walk-by visitation will be held Wednesday, June 10th, 10:00 A.M. until 10:45 A.M. in the Rose Chapel of Mabrie Memorial Mortuary. Her service may be viewed by live stream,... View Obituary & Service Information

The family of Mrs. Hattie M. Blanton created this Life Tributes page to make it easy to share your memories.

Send flowers to the Blanton family.