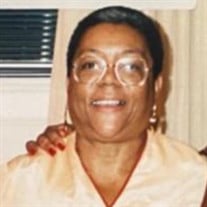 "In knowing your loved one is not far away, but she is with you in spirit every hour of the day." Ms. Haroldeen Hartsfield entered into Eternal Rest on August 6, 2020. A walk-by visitation will be held Friday, August 14, 2020 from 9:00 A.M. to 10:45 A.M. in the Rose Chapel of Mabrie Memorial Mortuary. Her Celebration of Life service will be attended privately; and can be viewed by live stream Friday, August 14, 2020, starting at 11:00 A.M. Live stream access: https://www.mabriemortuary.com/HaroldeenHartsfield ________ Haroldeen Hartsfield, affectionately called “Deenie” was born on Friday, November 15, 1946 to Harry and Alberta Murphy Hartsfield in Detroit, MI. Deenie was the first born of seven children. She was baptized in the Roman Catholic faith and attended Catholic school at Sacred Heart and St. Elizabeth High School, graduating from Detroit Central High School in 1964. Growing up in Motown City’s west side, Deenie enjoyed music and was an avid photographer, documenting family gatherings and activities with friends,which photos she placed in collections shared for decades. She earned an academic scholarship to Wayne State University (Detroit, MI)where she pledged Delta Sigma Theta, Tau Chapter, and met many of her lifelong friends. After graduation in 1968 with a Bachelor of Arts degree, she focused on a career that allowed her to help others and received a Master of Social Work degree two years later. Deenie’s commitment to helping the underserved of her community led her to the law. She began her legal studies in 1971 at Texas Southern University, now Thurgood Marshall School of Law, in Houston, TX. To secure additional financial support for her educational dream, she moved to Des Moines, IA to complete her legal education at Drake University School of Law in 1974. Haroldeen returned to Houston to take the July bar exam and was admitted to practice by the State Bar of Texas that October. Attorney Hartsfield worked for the Gulf Coast Legal Foundation in its downtown Fannin Street office and the Acres Homes area before going into private practice. A chance meeting in the elevator with one of the 18 Houston black women attorneys, Zinetta Burney, resulted in Deenie becoming a founding member of the Law Offices of Burney, Caggins and Hartsfield in 1975. As an attorney, she practiced both civil and criminal law with a concentration in family and probate law. Concerned about the availability of legal services in Houston’s northwest side, she and four other black female lawyers,in August 1975,founded the law firm of (Zinetta) Burney, (Joan) Edwards, (Shelvin) Hall, (Haroldeen) Hartsfield and (Algenita) Scott in the Acres Homes area of Houston. Haroldeen insisted that the practice be located in Acres Homes because of the closing of its legal services offices in that neighborhood. For their efforts and focus on the low-income residents, Deenie and her law partners were recognized in a feature article in Ebony magazine in March 1976 entitled, “Sisters in Law.” As her law partners expanded their areas of practice and into other careers, Haroldeen remained committed to providing accessible legal services to individuals in need. She became a solo practitioner from 1984 until 2011 when she retired from practicing law. Thereafter, she devoted her energies to improving the welfare of children, becoming the Director of Human Resources for the William Smith Senior’s Tri-County Child Development Council, Inc. from 2011-2013. Always the health enthusiast, she was the original lifestyle “naturalist” --- natural foods, unprocessed vegetables, non-chemical hair products and toiletries, fasting weekly and encouraging her family and reluctant friends to do likewise. As a participant in the National Bar Association International Affiliates Program, Haroldeen traveled to South Africa and also visited Egypt, Jamaica and the Bahamas. A bold, assertive Haroldeen broke Harris County courthouse traditions of staid clothing and restricted appearances. She mentored many young lawyers in acceptable “non-conformity” and set standards regarding which traditions of the rule of law had to be followed based on what was actually written, important and necessary. The brightest highlight of Haroldeen’s life was her children, Tewahado and Solomon, to whom she gave birth at home on Cleburne Street in Houston’s historic Third Ward. She was a proud, doting mother, directing her children’s every educational endeavor, selecting the “right public schools,” attending their programs, enrolling them in the Harris County Aquatics program and driving them to church activities at the Pine Oak Cornerstone Baptist Church. Deenie was a founding member of Pine Oak Cornerstone, which was established by her law partner, the Reverend Don R.Caggins and his wife, Mrs. Ruth Caggins. At the church, she served as Director of Christian Education, passing on her strong religious beliefs to her children and other members. Mom Haroldeen made sure her children were exposed to extra-curricular events – museum exhibits, taking music lessons and attendance at African American and other celebrations. Nothing interrupted her presence at their school programs and her helping them with their projects.She was very proud of their work ethic. Small wonder that both Tewahado, a teacher, and Solomon, a lawyer, would embark on careers that make the lives of others better. Deenie was a funny, giving and loving person. She gave passion, dedication and perseverance to any goalor job she pursued. She lived a life of purpose that focused on helping others, concentrating on her children and family. On Thursday, August 6, 2020, Deenie joined her parents and brother, Richard Alan “Rick” Hartsfield, in the loving arms of the God she served. She leaves to cherish her memories: her daughter, TewahadoYashimabetHolnessAligaz(son-in-law, SemereAligaz) of Houston, TX, her son, Solomon Jahshamon Djosimar Holness of Houston, TX, her grandson, Emory Amir Yashua Holness of Fort Worth, TX, her brothers and sisters, Joyce Y. Hartsfield of New York, NY, Albert E. Hartsfield (Gracie) of Detroit, MI, Judy A. Hartsfield (Leon Holmes) of Detroit, MI, Anthony C. Hartsfield (Anita) of Lexington, KY and Roderick T. Hartsfield (Janice) of Detroit, MI, sister-in-law, Joyce Foster-Hartsfield of Southfield, MI, aunt, Olelia Stubblefield of Lincoln, NE, uncle, Henry Murphy (Doris) of Wilmington, DE, many nieces, nephews, cousins, family members and friends.

"In knowing your loved one is not far away, but she is with you in spirit every hour of the day." Ms. Haroldeen Hartsfield entered into Eternal Rest on August 6, 2020. A walk-by visitation will be held Friday, August 14, 2020 from 9:00 A.M.... View Obituary & Service Information

The family of Ms. Haroldeen Hartsfield, Esq. created this Life Tributes page to make it easy to share your memories.

&quot;In knowing your loved one is not far away, but she is with you...

Send flowers to the Hartsfield, family.