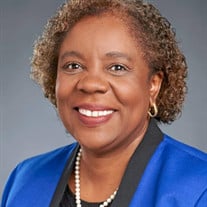 Gwendolyn “Gwen” Hill Webb was a loving wife, mother, grandmother, sister, and friend. She entered God’s arms after a battle with cancer on April 17, 2022 at age 67. It was Easter Sunday. She is survived by her husband, Stephen P. Webb; her two children, Stephanie Webb and Katherine Wright; her grandson, Clinton Wright; and her three brothers, Michael Hill, Samuel Hill, and Paul Hill. Gwen was the only girl of five children born to Samuel Clarence and Lillie Beatrice Hill on March 13, 1955 in Mount Vernon, NY. Gwen met her husband, Stephen, on their first day of Yale University, where they were both studying Political Science. Upon graduation, they attended law school at the University of Texas, getting married after their first year. They shared over forty-four years of marriage. Gwen was passionate about law. After working for the City of Austin, she and Stephen had a successful law practice in Austin, TX for thirty years. For nearly a decade during that time, she and Stephen worked as hearing officers for the Texas Education Agency (TEA). She joined the City of Houston in December 2018 as a water rights attorney, and retired in July 2021. Gwen’s extended family, the Hairstons, were always a point of pride. Her mother, Lillie, was one of eleven children of Braxton and Brown Lee Hairston, and Gwen spent her summers growing up visiting family in Winston-Salem, NC. Later, she and her family both attended and hosted multiple family reunions, including in Austin, TX and Orlando, FL. A memorial service celebrating the life of Gwendolyn Hill Webb will be held on Saturday, May 14th, 2022 at Ebenezer Baptist Church (1010 East 10th Street | Austin, TX | 78702) at 12:00 PM. In lieu of flowers, please donate to the MD Anderson Cancer Center. (https://gifts.mdanderson.org/).

The family of Mrs. Gwendolyn "Gwen" Hill Webb created this Life Tributes page to make it easy to share your memories.