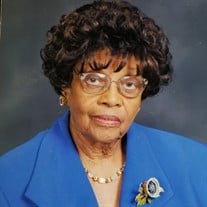 A Life Remembered, Cherished and Never Forgotten Gloria Laverne Starlard Lacey, made her peaceful transition into eternal rest May 17, 2019 in Houston, Texas. Gloria Lacey was born in Hot Spring, Arkansas, the second sibling born to the late Earl Clarence Starlard and Ruth Guinn Starlard. Faith and family were the most important parts of her life. At an early age she confessed her faith in Jesus Christ as her Lord and Savior. Her faith was supported through a long tradition of followers of Christ at Visitors Chapel A.M.E. Church. The tradition started with the 1st generation which was Mr. Tobe Washington Harris (Charter member, Trustee at Visitors Chapel and Great Grandfather of Gloria); 2nd generation- Daisy Harris Guinn (her Grandmother); 3rd generation- Ruth Guinn Starlard and Earl Starlard (her parents); 4th generation was Kathryn Starlard Dimmer, Aubrey Earl Starlard, Dr. Victor Starlard, and Beverly Starlard Hardin (her siblings all that proceeded her in death). She completed her early education at Woodland Elementary and Langston High School in the Hot Springs School system. She attended Jarvis College in Texas and meet the love of her life Ilander Lacey. They were married on February 10, 1948. Ilander was Gloria’s greatest supporter while she earned a Bachelor of Arts Degree - AM&N College (UAPB) and a Master’s Degree in Education from the University of Arkansas (Fayetteville). During her tenure as a teacher she influenced the lives of many young children in the Hot Spring School system for 36 years. Ilander Lacey preceded her in death. This union was blessed with one son, Ilander Riccardo (Marylois) of Houston, TX who survived her in death. She was also survived by three granddaughters, Leah Lacey-Watkins (Ronald Jr.) of Little Rock, AR; Riccarda Lacey and India Lacey, both of Atlanta, GA and one great grandson Morrice Leon Richardson, and a host of nieces, nephews, relatives and friends. She was actively involved in her churches (Visitors Chapel in Hot Springs, AR and Silverlake in Pearland, TX) for over 80 years. She was also actively involved in the Hot Springs community. She was an active member of Church Women United, Bible Study Fellowship International, Hot Springs Chapter of the American Association of University Women, Retired Teachers Association, NAACP, and Entre’Nous Social Club. She was a member of the Alpha Kappa Alpha Sorority Incorporated.

The family of Mrs. Gloria Starlard Lacey created this Life Tributes page to make it easy to share your memories.

Send flowers to the Lacey family.