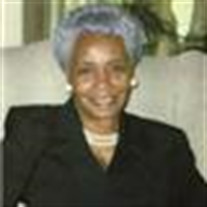 Georgia R. Stribling 1932-2015 Georgia Ruth Stribling was born in Longview, Texas to Booker T. Stubblefield and Eura D. Jackson Stubblefield on November 8, 1932. After moving to Houston, Texas in her early childhood, she grew up knowing the Lord at an early age as a member of Beebe Tabernacle C.M.E. Church. Georgia went on to graduate from Phyllis Wheatley high School in 1949. Georgia married Frank Henry smith and to this union two sons were born, Gerald Bernard and Raymond Dewayne. Later in her life she married George Claude Stribling and gained two sons, George Claude and Van Ellis and a daughter, Gwen Denise. Georgia awakened early morning to get the bus to her job at Buffalo Pharmacy. She left Buffalo Pharmacy and began employment with the Coca Cola Bottling Company. She began inspecting the bottles on the bottling line and after 22 years retired as a supervisor in cash management. Being blessed to be a blessing, Georgia volunteered for the Bread of Life Ministry St John’s Downtown. She helped cook breakfast and serve the homeless community for 14 years every Saturday morning. Among her many accomplishments, she was honored as A Distinguished Christian Women by Ebenezer United Methodist Church in 1998. A true giver in all respects, Georgia, shared freely with everyone. Her presence was graced with her warmth, her beautiful sense of style and her gift of hospitality. Her holiday gatherings, where she shared her excellent cooking and baking skills with family and friends will be forever cherished. She is preceded in death by both parents, her husband, George C. Stribling, and her sister, Verdell D. Sims. Georgia is survived by her sons, Gerald B. Smith (Anita), Raymond D. Smith (Sarah), George C. Stribling and Van E. Stribling (Deborah); daughter, Gwen D. Henderson; grandsons, Marcus Smith (Heidi), Jackson Smith, Jordan Smith, Samuel Brown, Lance Stribling, Kendrick Wesley, Sean Sonnier and Van Stribling, Jr.; granddaughters, Joy Smith, J”ne Allen, Christin Stribling, Melody Sells (Orlando), Rose Brown, Shameka Brown, Chandler Harvey, and Destiny Henderson; her dear friend Robert Denson; a host of great-grandchildren, many nieces and nephews, and friends. Georgia will be remembered for her loving spirit, her strong sense of family and her gallant and courageous “walk” with Alzheimer’s. Victory is yours, sweet Georgia! Our loss…your liberation! The Celebration of Georgia’s life will be 11AM, Monday, June 15th at St John’s Downtown, 2019 Crawford St. Visitation will be prior to service beginning at 10AM. In lieu of flowers, donations can be made to the Bread of Life Ministry St John’s Downtown and the Alzheimer’s Association.

Georgia R. Stribling 1932-2015 Georgia Ruth Stribling was born in Longview, Texas to Booker T. Stubblefield and Eura D. Jackson Stubblefield on November 8, 1932. After moving to Houston, Texas in her early childhood, she grew up knowing the... View Obituary & Service Information

The family of Georgia R. Stribling created this Life Tributes page to make it easy to share your memories.

Send flowers to the Stribling family.