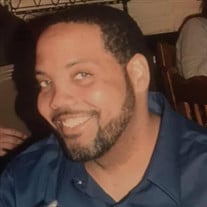 Your life was one of kindly deeds, A helping hand for others' needs, Sincere and true in heart and mind, Beautiful memories left behind. Mr. Eric T. Montgomery entered into Eternal Rest on October 10, 2020. His Celebration of Life service will be held Saturday, October 24, 2020 at 1:00 P.M. in the Rose Chapel of Mabrie Memorial Mortuary and may be viewed by livestream: www.mabriemortuary.com/EricMontgomery ——— Eric Trent Montgomery was born on January 4, 1978 to Vernell T. and Verda J. Montgomery in Baton Rouge, Louisiana. He was the third of four children born to his parents. Eric attended Southern University Laboratory School from kindergarten to eighth grade. He then attended Scotlandville Magnet High School and graduated from Baker High School in 1996. He further continued his education at the Southern University A&M College and graduated from Alabama A&M University in 2001 with a Bachelor‘s of Science in Electrical and Computer Engineering. He later worked on a Master’s degree in Management and Systems at New York University. Eric commenced his career as a computer engineer for IBM in Rochester, Minnesota and later transferred to Houston, Texas between 2001 and 2009. For the next year he worked with the Alabama Supercomputer Center (Computer Sciences Corporation) as a High Performance Computing Administrator / Architect. Between 2012 and 2015 he moved on to a Healthcare Management Systems position as a Systems Architect in Nashville, Tennessee. Eric then moved to New York and worked as an IT Project Manager for New York University between 2015 and 2019. He then relocated back to Houston, Texas in which he worked as a Project Manager for Pros and a Network Project Manager for Hewlett Packard through 2020. Since Eric was a child he had a vibrant and curious mind, and a strong love for sports, family and exploring the world. From a young age, Eric played, refereed, and coached soccer. He played football in high school for Baker High. His favorite football teams were the Dallas Cowboys and the Minnesota Vikings. He loved to experiment with food and watched cooking shows such as Chopped, Man vs. Food, and Diners, Drive-Ins and Drives looking for inspiration. Eric loved to travel and plan resort trips and cruises for his family. Eric’s biggest love was his family. He constantly planned family gatherings nearly every weekend and made sure everyone was entertained and well fed. Even in illness, Eric persevered getting up and brushing himself off over and over in an effort to regain his health. God called Eric home October 10, 2020. He departed this life at 1:00pm at CHI St. Luke’s Hospital in Houston, Texas. His family kissed him goodbye ahead of time, promising him that they would see him again. Eric was preceded in death by his paternal grandparents Trent and Dorothy Montgomery and maternal grandmother Virda Inez Welch, as well as his beloved dogs Beaux and Montana. He was survived by his parents, Vernell T. and Verda J. Montgomery, three sisters, Andria Montgomery, Jennifer Montgomery and Stephanie Comeaux, three nieces Kamryn Thomas, Amaya Brown, Morgan Comeaux and nephew, Andrew Comeaux.

Your life was one of kindly deeds, A helping hand for others' needs, Sincere and true in heart and mind, Beautiful memories left behind. Mr. Eric T. Montgomery entered into Eternal Rest on October 10, 2020. His Celebration of Life service will... View Obituary & Service Information

The family of Mr. Eric T. Montgomery created this Life Tributes page to make it easy to share your memories.

Your life was one of kindly deeds, A helping hand for others&#39;...

Send flowers to the Montgomery family.