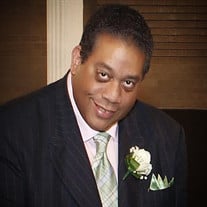 "You can remember him and only that he is gone; Or you can cherish his memory and let it live on." Edwin Charles Harrison was born on August 26, 1956, in Ogden, Utah. Reverend Edwin Stafford Harrison and Mrs. Sylvia Willetta Harrison adopted Edwin and brought him to Houston, Texas where he grew up in the Third Ward. Edwin attended Lockhart Elementary, Miller Junior High School, and graduated from Sharpstown High School. Edwin was an active member of Trinity East University Methodist Church. While in high school, he earned the rank of Eagle Scout with Troop 242 at Wheeler Avenue Baptist. After graduating, Edwin attended Texas Southern University. During that time, he met Linda Sue White. After earning a Bachelor of Arts Degree in Finance, they were married on July 2, 1983, in Indianola, Mississippi. Immediately, he began his career in finance in Houston working at savings and loan associations. During their marriage, they had two sons, Edwin II and Alexander, and a daughter, RosAnne, who arrived from California in 1992. His career advanced with a position in the Harris County Office of Financial Services. The couple worshipped at Trinity UMC and Edwin was Scout Leader of Troop 212 at St. James Episcopal Church. He loved sports, especially football. He enjoyed watching Alexander in football and track; RosAnne in tennis, track, and swimming; and Boomer in football and track, and throughout college at University of Colorado, and in the National and Canadian Football Leagues. Edwin emphasized education and each of his children earned their bachelor’s degree. Under his leadership in Troop 212, his sons and others achieved Eagle Scout rank. He also served on the Boy Scouts Board of Directors for the Sam Houston Area Council. In addition, he and Edwin II were initiated into the Houston Alumni Chapter of Kappa Alpha Psi in 2008. The fraternity recognized him as an Outstanding Kappa in Finance in a Special Issue of The Journal. In 2010, Edwin joined Good Hope Missionary Baptist Church where he was appointed to the Board of Trustees. He later served as interim Chief Financial Officer. Edwin helped to form the Ministry of Defense, served as a Small Group Leader, and worked with the Golf Ministry to raise funds for scholarships. After 22 years, Edwin retired from Harris County in 2011. However, he was committed to developing the Third Ward community, Edwin became Executive Director of Row House Community Development Corporation in 2013. He formerly served on the Row House Board of Directors. He received the Project Row House Community Champion Award in 2017. He worked there until his health began to decline in 2020. Edwin transitioned on February 4, 2022. He was preceded in death by loving parents, Rev. and Mrs. Edwin S. Harrison; Calvin J. Jones, biological father; and Cecile Edwyna Harrison, aunt. He is survived by: Linda White Harrison, wife; Edwin II (Kishanda) Harrison, son; Alex E. Harrison, son; Sandra (Albert) Harrison Lee, biological mother; Edwin III and Sebastian Harrison, grandsons, all of Houston; and RosAnne (Glenn) Applewhite, daughter; Annice, Glenn and Arrington Applewhite, grandchildren, all of Fresno; Houston, Texas; Alain (Sharon) Lee, brother, Lewisville, Texas; and a host of other family members and special friends. Visitation and warm expressions will be shared at Mabrie Memorial Mortuary, 4 – 7 pm, Friday, February 11, 2022. Services will be held at Good Hope Missionary Baptist Church, 3015 N. MacGregor Way, 77004 at 12 noon on Saturday, February 12, 2022. Visitation prior to service begins at 11:00 am. For livestream access: www.goodhope.org. In lieu of flowers, the family requests donations to the Good Hope Scholarship Fund: https://hopeforfamiliesinc.org/donate Type "Harrison" in the comments.

"You can remember him and only that he is gone; Or you can cherish his memory and let it live on." Edwin Charles Harrison was born on August 26, 1956, in Ogden, Utah. Reverend Edwin Stafford Harrison and Mrs. Sylvia Willetta Harrison adopted... View Obituary & Service Information

The family of Mr. Edwin Charles Harrison created this Life Tributes page to make it easy to share your memories.

&quot;You can remember him and only that he is gone;
Or you can cherish...