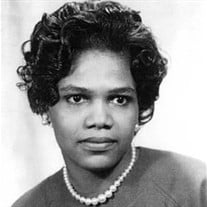 Edith Irby was born on December 23, 1927, in Mayflower, Arkansas, to Mattie Buice Irby and Robert Irby. From the humble beginnings of being the daughter of a sharecropper and domestic worker, Dr. Irby Jones rose above her adversities. At the... View Obituary & Service Information

The family of Dr. Edith Irby Jones created this Life Tributes page to make it easy to share your memories.