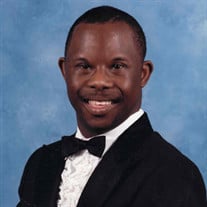 Obituary Ecclesiastes 3:1-2 To everything, there is a season, and a time to every purpose under the heaven. A time to be born, and a time to die; a time to plant and a time to pluck up that which is planted. Edgar “James” Williams, 53, was born on November 1, 1964, in Houston, Texas to Henry & Rosa Williams. James was a proud, fearless, independent man, who received favor everywhere he went and blessed everyone he met. Even though James had a disability, he was taught at an early age to never limit himself. James could read, write and graduated with a high school diploma. As a result, at the age of 18, James told his parents, he needed to move out on his own. “I’m a man,” were his words. James did just that. He had his own apartment and also worked a full-time job for an initiative called “On My Own.” James loved his family, people and life. He was an avid Pittsburg Steelers fan! He was baptized at an early age at New Faith Church under Pastor T.R. Williams, and later united with Lilly Grove MBC under Rev. Curtis Wallace. James departed this life on Wednesday, October 24, 2018. He was preceded in death by his maternal grandparents, Herman and Esther Brightmon; paternal grandfather, James Williams; uncle, Elijah and aunt Clara Mack, and lastly, his brother, Michael Eugene Williams. He leaves to cherish his memories: father and mother, Henry “Sam” & Rosa Williams; his beloved brother, Mark Dwayne Williams, a niece, a nephew, and a host of aunts, uncles, cousins, other family and friends.

The family of Mr. Edgar James Williams created this Life Tributes page to make it easy to share your memories.

Obituary Ecclesiastes 3:1-2 To everything, there is a season,...

Send flowers to the Williams family.