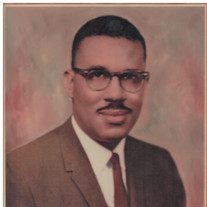 Earl St. Clair Newsome Jr. passed away on February 17, 2022. He was preceded in death by his wife of 59 years, Exa Mae Martin Newsome. He is survived by his two sons, Lieutenant Colonel (Ret.) Earl St. Clair Newsome III (Audrey), and Senior Police Officer Michael Jerome Newsome; grandchildren- Dr. Valerie Newsome Garcia (Sinaka), and Michael Quan Newsome, great-granddaughter, Aalia Brave Garcia, one sister- Margaret Routt, and a host of nieces, nephews, and cousins. Earl was a native Houstonian, born June 2, 1926. He graduated from Phyllis Wheatley High School in 1943, and shortly after began his studies at Prairie View A & M University. While completing his undergraduate studies, Earl was employed in the U.S. Postal Service, and was drafted in the U.S. Army, serving several years during World War II. After his military service, Earl returned home and completed his bachelor’s degree at Texas State University for Negroes (Texas Southern University) in 1949. He later completed his master’s degree in Education at Texas Southern University, and also completed post graduate courses at the University of Houston. He later began his employment with the Houston Independent School District (HISD) and quickly rose in positions there, first teaching at Gregory Elementary, and then serving as Principal of Kay Elementary and Chatham Elementary. His final assignment in HISD was in the position of Director of the Department of Welfare. Earl was a 33rd Degree Mason, a Life Member of Alpha Phi Alpha Fraternity Incorporated, and served as President of a local chapter of Phi Delta Kappa Fraternity, and past President of the El Dorado Social Club. Visitation and service will be held at Mabrie Memorial Mortuary on Thursday, February 24, 2022, 4 - 7 pm.; service will begin at 5:30 pm. For livestream access to service: https://m.youtube.com/watch?v=6jCG_rAv9PA&feature=youtu.be He will join his beloved wife at the Houston National Cemetery on Friday, February 25, 2022 at 10 am. His final salute and military honors can be viewed by livestream: https://m.youtube.com/watch?v=Ywv_U0y8lik&feature=youtu.be In lieu of flowers, please consider donations to the American Cancer Society: https://www.cancer.org/involved/donate.html Please note: Masks are required for attendance.

The family of Mr. Earl St. Clair Newsome Jr. created this Life Tributes page to make it easy to share your memories.

Send flowers to the Newsome family.