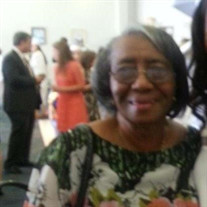 Dorothy Jean Scott passed away on December 5, 2014. Dorothy attended the Blackshear Elementary and High School graduating in 1949. She also graduated from Paul Quinn College in 1953 and obtained her Master’s degree from Texas Southern University in 1969. Dorothy was the first in her immediate family to graduate from college. She taught school with the Groesbeck Consolidated School System and finished her career with HISD with 26 years of service. After relocating to Houston, she joined Wheeler Avenue Baptist Church remained a faithful member until her demise. She served on the Courtesy Corp 4C for over 30 years. She also was an active member of Top Ladies of Distinction, Inc. Missouri City Chapter, held the positions of Financial Secretary and Courtesy Committee Chair. She was also a member of National Women of Achievement Missouri City/Houston Metro Chapter. In this organization she serviced as Vice-President and Secretary and spent a lot of her time as an advisor to the Juniors. She was also a member of Zeta Phi Beta. She was preceded in death by her husband Stevenson Scott, parents Andrew J. and Willie D. Powell, brothers Archie Johnson, Shelly A. Powell, Vernon J. Powell and Aaron T. Powell (Mary Helen) and a sister Mildred Odessa Jett. Left to mourn her death is her daughter Sonya D. Johnson and son Christopher Scott, sisters Maud Johnson of Las Vegas, NV, Mary Caldwell of Compton, CA, Stella Powell of Ft. Worth, TX, Ruby Powell of Waco, TX and a brother Andrew Powell (Dianne) of Missouri City, TX, her grandchildren Ericka (Wade) Graunke, Jack Johnson, Zakiyyah Scott, Nailah Scott, Daria Powell and Tahirah Scott and great-grandson Myles Graunke along with a host of nieces, nephews and friends. Funeral Service will be held Saturday December 13 at 1:00 PM, Wheeler Avenue Baptist Church, 3826 Wheeler Ave.

The family of Dorothy Jean Scott created this Life Tributes page to make it easy to share your memories.

Send flowers to the Scott family.