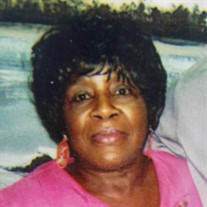 Mrs. Clara Lee Jones was born on September 12, 1928, in Fort Wayne, Indiana. Clara completed her earthly journey on October 10, 2020, in Houston. She was a devoted woman of God as a lifelong member of Union Baptist Church (Fort Wayne, IN.)... View Obituary & Service Information

The family of Mrs. Clara L. Jones created this Life Tributes page to make it easy to share your memories.

Send flowers to the Jones family.