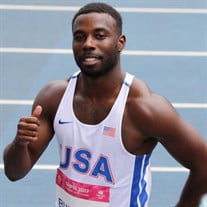 Cameron Malik Burrell was born on September 11, 1994 in Houston, Texas to Leroy and Michelle Finn Burrell. He was their first child. Cameron attended Ridge Point High School where he was star athlete, leading the Ridge Point Track Team to its first ever District Championship in 2013. As an individual competitor, Cameron won back-to-back State Championships in the 100 Meter Dash and was runner up in the Long Jump, in 2013. After graduating high school, Cameron chose to continue his track and field career at the University of Houston, where his leadership was acknowledged by his peers as he was elected Team Captain. During his senior year, Cameron was the NCAA Champion in the 100 Meter dash. Additionally, Cameron was the anchor leg of the Cougars’ 4x100 meter relay team that went on to shatter the previous NCAA record and was declared an NCAA All American in every year of his college career, which is a rare feat. Cameron is the perfect example of “student surpassing the teacher” and “keeping it in the family.” Cameron broke his father’s record in the 100m at the UH. In addition to Cameron holding the 100m record, he also holds the 60m record at UH. Cameron’s legacy is lasting at the UH and he will never be forgotten. Cameron’s traveled the world, representing the United States where he racked up numerous athletic accolades, both in high school and in college. He earned spots on many United States international teams and graced podiums often. A few highlights include gold medals in the 2018 Athletics World Cup (4 x 100m Relay), 2015 North American Caribbean American Championships (Long Jump), 2012 World Junior Championships (4 x 100m Relay), 2013 Pan American Junior Championships (4 x 100m Relay), and the 2011 World Youth Games (Medley Relay). Off the track, Cameron’s star shined equally as bright. He was an extremely talented creative, and poignant thinker, with a keen interest in fashion, art, music, poetry, and travel. He was also a well-known DJ in Houston, manning the 1s and 2s in various clubs and lounges. He also DJ’d shows for some of Houston’s hottest hip-hop artists. Cameron was not just an athlete. He was well rounded and served on various organizations that served others, including the Student Athlete Advisory Committee. His commitment to community service was exemplified in his pride in being a member of Omega Psi Phi Fraternity, Incorporated. He graduated from the UH in Spring of 2018 with a B.S. in Retail and Consumer Science. Despite all of his talents and accomplishments, Cameron was known for his reserved and humble disposition. He was loved and cherished by his friends and family members alike, and he had a lasting impact on every person he met. Cameron departed this earth on August 9, 2021. Reflections and warm expressions will be shared during a memorial visitation on Sunday, August 15, 2021, 6:00 p.m. until 8:00 p.m. at the A.D. Bruce Religion Center on University of Houston campus, 3841 Cullen Blvd., Houston, TX 77204. A Celebration of Life Service will be held Monday, August 16, 2021, 4:00 p.m. at Westbury Church of Christ, 10424 Hillcroft St., Houston, TX 77096 Livestream access will be available through the Facebook page of Westbury Church of Christ: https://www.facebook.com/westburycoc/ or YouTube: https://youtu.be/4yXYv2mf8uE Cameron was a loving father who adored his daughter Amora Stanford. She was his heart. Cameron is survived by his Daughter Amora Stanford; Parents Leroy Burrell and Michelle Burrell; Brothers Joshua and Jaden Burrell; Amora’s mother Destiny Stanford; Grandparents Sarah Holton, Paul and Delores Rodgers; Aunts and Uncles Valerie Baker, Crystal Burrell, Dawn Burrell, Ronald Max and Darlene Burrell, Jovanni Robbins, Constance Finn, Damien Brown, Sr., and Kevin Holton; Cousins Natasha (Burrell) Childs, Ronald Burrell Jr., Christopher Baker, Ciarra Baker, Damien Brown, Jr., Christopher Long, Austria Finn-Jackson, Asia Finn and Elijah Finn. Cameron was preceded in death by Grandparents Leroy Brown, Australia Finn Jr.; and Uncle Mark Finn. Cameron is also survived by numerous great aunts, cousins and many other relatives.

Cameron Malik Burrell was born on September 11, 1994 in Houston, Texas to Leroy and Michelle Finn Burrell. He was their first child. Cameron attended Ridge Point High School where he was star athlete, leading the Ridge Point Track Team to its... View Obituary & Service Information

The family of Mr. Cameron Malik Burrell created this Life Tributes page to make it easy to share your memories.

Send flowers to the Burrell family.