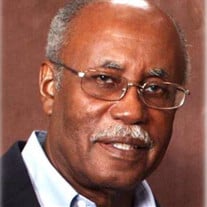 A Light Has Gone Out From The World A Star has flickered and died . . . Caliph Johnson passed away peacefully, surrounded by his beloved family on Saturday, March 12, 2022. Born in St. Joseph, Louisiana on October 3, 1938, Caliph Johnson was one of 11 children born to the union of Mary Stewart Johnson and the Rev. Sargent Johnson. From an early age, Caliph displayed exceptional intelligence and analytical ability, excelling in academics and leadership. His higher education journey began at Southern University in Baton Rouge, Louisiana, where he pledged Alpha Phi Alpha Fraternity, Inc. and worked as a student assistant at the campus School for the Deaf. Facing the draft during the Vietnam War, he enlisted in the U.S. Army and was assigned to a dental unit in Vicenza, Italy where he served his entire tour of active duty. Caliph was decorated as a Marksman (Rifle M-14), earning the Good Conduct Medal. He graduated from the University of Maryland (Overseas Division) with a Bachelor of Arts degree in Political Science, in 1965. Caliph’s fierce ambition and determination took him to California’s Bay Area where he served as Executive Director of the Oakland Citizens Committee for Urban Renewal (OCCUR). He was a budget auditor for the City of Oakland, and a collections manager at Bank of America, all while completing a Master of Arts in Public Administration at the University of Santa Clara. Keeping a youthful promise to himself, he earned his law degree from the University of San Francisco in 1972. After law school, Caliph took a teaching fellowship in civil rights law at Georgetown University Law Center in Washington, DC, earning a Master of Laws (LLM) degree, before beginning his legal career as an appellate attorney at the Equal Employment Opportunity Commission (EEOC). In 1975, Caliph accepted a tenure-track position as Professor of Law at Texas Southern University Thurgood Marshall School of Law (TMSL) in Houston, where he served for more than 32 years. Simultaneous with the start of his career at TMSL, Caliph accepted a commission at the rank of Lieutenant in the Judge Advocate General’s Corps of the United States Naval Reserve, a position which he held for some 20 years. By the end of his career as a Navy Reserve Officer, Caliph had earned a National Defense Service medal and a Meritorious Service medal among other commendations, and attained the rank of Captain. In 1999, after retiring from full-time teaching at the law school, Caliph established the Southwest Institute for Dispute Resolution, where he served as Director and Principal Officer, conducting mediations and arbitrations; and served as an Administrative Law Judge for the State of Texas. He served two terms on the State Bar of Texas Alternative Dispute Resolution Committee, one of them as its Chairman. He was predeceased by his parents, Mary and Sargent Johnson, his brothers Henry, Sargent, Jr. and Alvin, and his sister Ira. He leaves to mourn his wife, Ayesha Mutope; his remaining siblings Ruby Batson, Yusuf (Arunsri), Clarence (Sylvia), Stewart (Sylvia), Katie Johnson and Carrie Deveaux; his son Caliph II (Danielle) from a previous union with Cheryl Chapman; his stepchildren, Nomeva Williams (Bert) and Dingane Mutope, and his four grandchildren: Milan, Axé, Oxala and Ayodele Johnson. Caliph Johnson was a man of integrity, dignity and courage. His multi-faceted career was marked by duty, service and advocacy for justice. He always found time to share his knowledge and to shine a light of wisdom as he coached the next generation. In his personal life, he was a kind, gentle and loving spirit, with a deep and abiding love for his son Caliph, a love which he also shared with so many young people who came into his sphere of influence. He was a consummate teacher, and his true joy was found in gently nurturing infants, children and youth. In turn, young people loved and respected him; among them, his two stepchildren, his four grandchildren, his nieces and nephews, and generations of law students. This is how he will be remembered. Caliph Johnson's Celebration of Life service will be held on Saturday, March 26, 2022, 11:00 a.m. at St. James Episcopal Church, 3129 Southmore Street, 77004. Visitation will be prior to service, starting at 10:00 a.m. For livestream access to his service: https://m.youtube.com/watch?v=t5aDQnEs8Iw&feature=youtu.be

A Light Has Gone Out From The World A Star has flickered and died . . . Caliph Johnson passed away peacefully, surrounded by his beloved family on Saturday, March 12, 2022. Born in St. Joseph, Louisiana on October 3, 1938, Caliph... View Obituary & Service Information

The family of Mr. Caliph Johnson created this Life Tributes page to make it easy to share your memories.

A Light Has Gone Out From The World
A Star has flickered and...