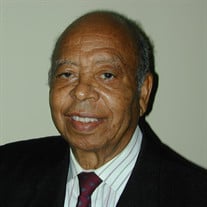 Mr. Benny A. Joseph, Sr, a longtime Houstonian and prominent African-American businessman passed away on Friday, August 17, 2018, while under care at the Michael E. DeBakey Veterans Affairs Medical Center. Mr. Joseph was was born December 10, 1924 and was married to the former Hattie Marie Calbert for 65 years To this union were born four children: his son Roderick Byron Joseph predeceased him in 2014; left to honor and cherish his memory are his loving wife, daughters Detra Clarke of Houston and Damita (Aaron) Holland of Denver CO, and son Benny A. Joseph II (Patricia Davis Lawson) of Houston. He was a loving husband, father, uncle, grandfather and great-grandfather, and friend to many, having lived 93 years. He was the owner and proprietor of Joseph’s Studio where he had his office, held photo shoots, developed and re-touched negatives and printed pictures. He practiced photography in and around the city of Houston for almost 40 years. He was also a proud Life member of Phi Beta Sigma fraternity where, at the time of his passing, he was the longest tenured member, having joined the Alpha Beta Sigma Chapter of Houston in June of 1959. Mr. Joseph was a veteran of World War II, where he served in Northern France. A Memorial Service to celebrate his life will be held at Mabrie Memorial Mortuary, 5000 Almeda Rd, Houston, TX 77004 on Saturday, September 15, 2018 at 11:00 a.m.. A Repast will follow the service at Westberry-Engram Sigma Educational Foundation, 3247 Elgin Street, Houston. A private burial service will follow at a later date. In lieu of flowers, the family has asked that contributions be made to Phi Beta Sigma Fraternity, Inc., Alpha Beta Sigma Chapter’s Westberry-Engram Sigma Educational Foundation scholarship fund at: www.sigmasofhouston.com/Membership/Donation/.

The family of Mr. Benny Alvin Joseph Sr. created this Life Tributes page to make it easy to share your memories.

Mr. Benny A. Joseph, Sr, a longtime Houstonian and prominent...

Send flowers to the Joseph family.