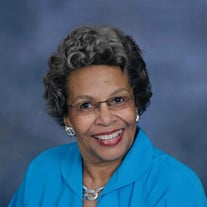 Barbara Ann Paige was born on October 24, 1937 to Thomas and Artrelle Priolenau at St. Mary’s Hospital in Brooklyn, New York. She was the youngest of four children: Gertrude, Thomasena, Thomas Jr. and Barbara. She attended and finished Public School 93 and Samuel J. Tilden High School. Her employment started while still in high school working summers and after school at Metropolitan Life Insurance Company. She continued upon graduation where she worked as a Data Entry Operator at General Motors until she moved to Texas. She united in marriage with Dwight Paige on February 13, 1965, at Memorial Baptist Church in Brooklyn, New York. She and Dwight relocated to Houston, Texas in 1966. There she gave birth to Lisa Ann in 1969 and Christopher Dwight in 1971. Barbara settled well in Houston by joining the company, Enron where she flourished in her career until her retirement in 2002. Barbara loved the Lord and on Palm Sunday, May 2004 she joined Lilly Grove Missionary Baptist Church. To live you must be born again and Barbara did live. The honorable Pastor Terry Anderson baptized Barbara and she began the work of the Lord as a faithful member and assistant secretary of her church school class. She is preceded in death by her parents, Thomas and Artrelle Priolenau; sister, Thomasena; brother, Thomas Jr. and son, Christopher. Leaving to survive her precious memories are husband, Dwight Paige; daughter, Lisa (Cedric); stepchildren, Kevin (Lori), Craig (Jackie), Michelle; her loving grandchildren along with sister, Gertrude and a host of nieces, nephews, family and friends. “There’s A Tree That’s Good for The Healing” I told a friend the other day, That I would soon be coming this way; I told him this body was getting weak, Surely but slowly, there’s a leak. Sometimes I would get up and sit back down, But still I make it, round by round; Someone told me about a tree, And just one leaf would heal me. I knew death was coming as a thief, So I asked my friend to pull me a leaf; Don’t you worry and don’t you fret, Today I have not one regret. No more rocking from side to side, I’m going where I’ll be satisfied; No more prescriptions to be filled, This old body is already healed. This shouldn’t take you by surprise, I told you I was going to paradise; I said it wouldn't be very long, You would look for me and I’ll be gone. I’ve fought a real good fight, Between me and God it’s alright; I don’t want you to be sad, Rejoice and be exceedingly glad. I’m not suffering, I have no pain, I’m going where there’s more to gain; I’ve finally made it to that tree, My friend was waiting with a leaf for me. In lieu of flowers memorial to: The Foundation for Sarcoidosis Research 1820 W. Webster Ave., Ste 304 Chicago, Illinois 60614 (866) 358-5477 www.stopsarcoidosis.org

Barbara Ann Paige was born on October 24, 1937 to Thomas and Artrelle Priolenau at St. Mary&#8217;s Hospital in Brooklyn, New York. She was the youngest of four children: Gertrude, Thomasena, Thomas Jr. and Barbara. She attended and finished... View Obituary & Service Information

The family of Mrs. Barbara Ann Paige created this Life Tributes page to make it easy to share your memories.

Send flowers to the Paige family.