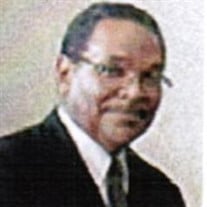 Arthur Wayne Haller fondly known as “Art” was born on September 17, 1944 in McBeth, Texas to the late Jackson Haller, Sr. and the late Emma Chizer Haller. He was the youngest of seven children. Art graduated from Angleton High School in Angleton, Texas. He later moved to Houston and earned a Bachelor of Arts degree from Texas Southern University. He went on to graduate school with a concentration in Business Administration. Art was united in holy matrimony to Ms. Patricia Hebert in 1971 and they were blessed with two children, Erik Todd Haller and Kellee Nicole Haller. He remained a devoted father, grandfather, brother and uncle until his death on June 21, 2020. Art began his career with the City of Houston in 1983, where he continued to rise through the ranks of the Human Resources Department. He believed in training employees and building partnerships between city departments. Accomplishments under Art’s leadership were broad. He was successful in the development of several training programs to include the City Accreditation Program for Supervisors, Leadership Institute Program, Administrative Skills Certificate Program, Certified Public Manager at Texas State University of San Marcos, and managed Testing and Development for Fire and Police Classified Employees. After he retired in 2014, he left a great legacy. Art is preceded in death by his parents, Jackson Haller, Sr. and Emma Chizer Haller, brothers, Robert Haller, Lawrence Haller, Jackson Haller, III; and sisters, Lula Malveaux and Margaret Simon. He leaves to cherish his memory, his brother Reverend Dr. Herman Haller, son, Erik Haller, daughter Kellee Haller, his grandchildren, Roy Willis and Malachi Haller; and a host of nieces , nephews, cousins, relatives and friends. A visitation will be from 9 a.m. until 10:45 a.m. Wednesday, July 1, 2020 at Mabrie Memorial Mortuary, 5000 Almeda Road, Houston, TX. A private funeral service will follow. Burial will be at Paradise South Cemetery in Pearland, TX. Live Stream Access will be made available Wednesday, July 1 at 11:00 A.M.: www.mabriemortuary.com/ArthurHaller

Arthur Wayne Haller fondly known as &#8220;Art&#8221; was born on September 17, 1944 in McBeth, Texas to the late Jackson Haller, Sr. and the late Emma Chizer Haller. He was the youngest of seven children. Art graduated from Angleton High School... View Obituary & Service Information

The family of Mr. Arthur Wayne Haller created this Life Tributes page to make it easy to share your memories.

Send flowers to the Haller family.