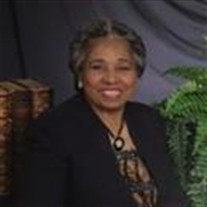 1935-2016 Almeta Prince was born in Milam County, Texas on December 22, 1935. She was the seventh of eight children born to Sam Albert Brown and Estella Webb Brown. The family moved to Hearne, Texas where she graduated from Blackshear High School. Almeta wed Charles Lee Prince, and they were happily married for well over half a century until his death in 2007. She was a devoted, dedicated wife and mother, and she and Charles were the proud parents of six children. Almeta became a Christian at an early age and was a member of Lilly Grove Missionary Baptist Church for decades until her death. One could often hear her sharing anecdotes from Reverend Anderson’s sermons with her family and friends; she always stated, “Reverend Anderson tells it like it is.” She took especial pride in her Sunday school class and frequently expressed how excited she was to be part of such a dynamic, spirit-filled, and uplifting group of women. Almeta was an extremely multi-talented and accomplished individual. While her children were young, she focused primarily on being a wife and mother and excelled in both areas. She was such a great cook, one would have thought she had attended the finest culinary school. Even though all her dishes were amazing, her signature plates were her German chocolate cake, banana pudding, sweet potato pie, and potato salad. She prided herself in being able to style hair – especially since she had never attended beauty school! Furthermore, she was such a great seamstress that she developed a business making everything from choir robes to prom dresses to wedding gowns. After her children were older, she worked at a Montgomery Wards department store where she became an assistant manager. She served in that capacity for many years. Of all of her many and varied interests, Almeta enjoyed her family most. Every Friday, she would prepare fabulous dinners for all her children, their spouses, and any of her grandchildren who were present. Almeta will truly be missed by her children Diane, Charles, Brenda, Donald, Howard, and Cheryl; her sons-in-law, Arthur and Duane; her daughters-in-law, Laquetta and Donna; her grandchildren, Shaunna, Brandon, Travius, Jennifer, Shannon, Raylon, Howard, Ashley, and Danyel; her great-grandchildren, Nicholas, Kaleb, Raven, and Reid; her sister, Lillie Marie Brown; her brothers, Sam Brown and Paul Brown, and a host of relatives and friends. Visitation will be prior to the service starting at 10:00 AM at Lilly Grove Missionary Baptist Church. The Celebration of Life Service will be Monday, April 25, 2016, 11:00 AM at Lilly Grove Missionary Baptist Church, 7034 Tierwester, Rev. Terry K. Anderson, Pastor, officiating. Interment will be at Houston National Cemetery.

1935-2016 Almeta Prince was born in Milam County, Texas on December 22, 1935. She was the seventh of eight children born to Sam Albert Brown and Estella Webb Brown. The family moved to Hearne, Texas where she graduated from Blackshear High... View Obituary & Service Information

The family of Almeta Prince created this Life Tributes page to make it easy to share your memories.

Send flowers to the Prince family.