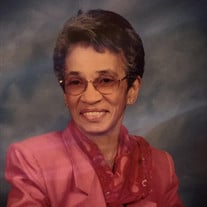 Alaveta “Veta” Harris was born on May 25, 1931 to the late Edward and Sylvia Howe. After giving her family 88 years of the most amazingly selfless love, she departed this life on the evening of Tuesday, June 11, 2019, held in the adoring arms of her grandchildren. Born and raised in the Bronx, New York, where she attended Morris High School, she had a quick wit and sayings for everything. She frequently mentioned how “aware” being from New York made her, stating, “I don’t want to live there, but it’s a good place to be FROM.” Veta was forced to grow up quickly in a home with 9 siblings, but it prepared her well for the job she cherished the most... taking care of her own nest of children and grandchildren. Veta married the love of her life, Thomas W. Harris, on March 16, 1948 and from that union they have five children left to honor and remember their love; Mona, Mark, Dean, Fred, and Alex. The family transitioned from the Bronx to Houston, Texas in the late 70s, and it became home to a wealth of grandchildren and great-grandchildren. Veta led an active life and believed in staying busy, facing every day with a purpose and NEVER being late. She took pride in her first job as a homemaker and cared for her household with wonderful home cooked meals, a spotless environment and a stern but loving hand (“Don’t mess with my nest.”). She was president of the PTA, editor of the PTA newsletter in New York, and taught ESL to Chinese students in Houston. She began working with NY Telephone Company at night but still managed to have a hot meal for her family every evening. Upon moving to Texas, she transferred to Southwestern Bell (AT&T) where she retired. Not wanting to sit idle, she began working part-time with the Holiday Inn hotel chain as a PBX operator where she stayed until the age of 81. A creature of habit, Veta arrived to work 2 hours early each day to ensure she was never late. A strong-willed and determined woman, she learned to swim and took Tai Chi lessons in her 70’s and took her first carrousel ride in her 80’s. Having a passion for the kitchen, Veta created some of the best Thanksgiving meals around with special recognition to her famous Mac-n-Cheese, Arroz con Pollo and exquisite iced teas. Extended family and friends were always welcome at this annual tradition and many eagerly accepted her invitation. Called to the Episcopal faith in 1963, she attended St. Andrews Church in the Bronx and Christ the King Church in Houston before settling into St. James Church in Houston’s Third Ward neighborhood. To continue her legacy are Veta’s five children, sixteen grandchildren; Damon, Lee, Nikki, Jourdyn, Jillian, Leah, Brieana, Connor, Kirkland, Thomas, Kyle, Gabrielle, Chloe, Olivia, Sophia, and Rocco; and three great-grandchildren; Lyberty, Joy, and Kyran. Veta is survived by her sister Sylvia Robinson and a host of nieces, nephews and “adopted” sons and daughters. She was preceded in death by her husband, her parents; and siblings; Anna Gause, Odessa Starnes, Ulysses Howe, James Howe Jr, Juliette Holmes, Louise Watts, Oretha Ferguson, and Fred Howe. Veta will be remembered as a bright, shining light to any she encountered with a hug that would radiate true love with each squeeze. Her last days on her 88-year journey as a were spent enjoying her final birthday party with her family that cherished every moment with her beautiful spirit. “Well done my good and faithful servant” says the Lord: Matthew 25:21

The family of Mrs. Alaveta Portia Harris created this Life Tributes page to make it easy to share your memories.

Send flowers to the Harris family.